Markets had a major meltdown on Thursday after President Trump initiated new tariffs on China as he angles for a deal on trade. At the time of the announcement equites were up big and they collapsed. 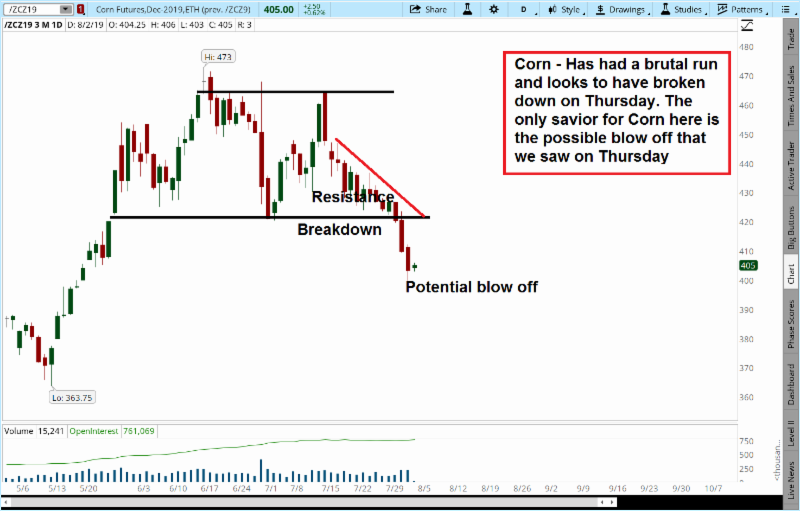 Markets had a major meltdown on Thursday after President Trump initiated new tariffs on China as he angles for a deal on trade. At the time of the announcement equites were up big and they collapsed. At the same time the grains were under pressure before the announcement and saw no further damage after the announcement

What a difference a week makes or should we say what a FED Decision makes. For equities this week was quiet until Wednesday at 2:00 EDT, the FED spoke gave the markets what they wanted and then fell apart. However the damage was no more than a sell off to support and will most likely attempt another rally.

Obviously the street convinced themselves that a .50 bps cut was due instead of the .25 bps that they priced in. The selling was fast and furious but not a total surprise. It was the typical buy the rumor and sell the news type of trade. The bottom line is simple, equities are at support which should hold. Nothing has really changed and those who expect a major meltdown will probably be chasing them up again.

It was another story for the grain markets which have been under pressure all week. All three have now been turned into shorts by our proprietary algorithm and are basically breaking down. We still believe there is a possible big market in the future but for now it looks like they will remain under pressure. We are short, watching with a long term bullish sentiment but short term bearish.

Meats had almost a textbook week, Fats and Feeders both failed right where they should have if they were going to fail. The only difference with Fats and Feeders was Fats were a little weaker selling off to support. However we are long both and are looking for upside breakouts. Hogs broke out to the upside last week which turned out to be another swine flu report. Hogs are now short and look to be going much lower

Crazy week in the Dollar, Gold and Crude. The FED continues to try and push down again by manipulating interest rates and here is the Dollar making a big charge to get to PAR. Gold after a big rally Monday got pounded for the same reasons the Dollar rallied but is still bullish on support. Crude has broken down and now looks headed to the high 40's.

The Bottom Line: Volumes have been light in all markets until yesterday. The key's we will be watching are volume and volatility and until we see action will remain conservative and following our algorithms. The next couple of days will go a long way in determining the next moves we should expect. As always we will keep you updated via text and email

Remember the news means nothing it always comes down to price action. TRADE THE NEWS YOU LOSE

If you are Call Bubba.

If you are not hedging, you should be. Why take unnecessary risk?

CORN - Has broken support and is now under heavy pressure. Our algorithm has turned bearish and Corn is in danger of breaking down. The only saving grace for Corn was the lack of volume most of the week with the exception of Wednesday which was heavy selling with heavy selling. 4.00 is a must hold in December Corn, if that fails 380 comes into play. We reversed this week based on our algorithm and will now stay short until it reverses back.

BEANS - Were under pressure all week and getting closing to breaking down. We are still long but could reverse any day based on the action. Looking at the charts if November Beans break 875 that could be enough to reverse us to short. For now Beans are at support and basically at a must hold level. We can still see the potential for a big market, however we could see a sell off first.

Position: Short 50% - Holding with concerns at a must hold area

WHEAT - Tested resistance at 508 and failed which is no surprise. The failure at resistance triggered a sell signal and we are now short Wheat. As with the others we could see a big market and are long term bullish we have to follow the algorithm and will be small short. For now until Wheat can break above 508 December look for these markets to remain under pressure.

DOLLAR - The FED spoke and did everything they could to pressure the Dollar and failed. The Dollar has exploded to new 2 year highs and looks to be headed to PAR. We are mow on track to what our expectations were all along that the Dollar is going to PAR. That now looks like it will happen sooner than later. The fact that the Dollar is a fear asset may be enough to push the Dollar to par.

CRUDE - Traded this week as expected and remains in the range of 55-60. Our algorithm has turned short and we have a small short position. Crude looks like it has broken down and should be headed down to the high 40's. The rally was based on fear and now looks like Crude is headed much lower.

S+P - The FED spoke on Wednesday and didn't deliver the news that Wall Street wanted to hear creating a hard sell off. The sell off as ugly as it was only brought the markets down to support and did no overall damage. We have reversed to short based on our algorithm. Markets have come to key areas, although it would not be a surprise to see a small rally, we are now short.

Hedge Recommendation: Portfolios should be Hedged

GOLD - After rallying Monday, Gold has been under heavy pressure the rest of the week. The FED announcement didn't help however Gold has come back to support. Like equities, Gold is on support and all the selling pressure from this week didn't break the uptrending pattern. That doesn't mean that Gold won't breakdown, but we will stay long and actually added at 1420 on the way down. 1410 December Gold is the key level to watch.

FEEDERS - Tried to breakout to the upside but failed which is no real surprise, the first attempt typically fails. Although Feeders pulled back a little the pattern suggest that they will break out and continue to move higher. The long-term view looks very strong and we would expect Feeders to continue to run higher.

FATS - This week has been interesting as October Fats tried to breakout to the upside before failing and are now on the bottom at a must hold support. These levels should hold and another run at the top is in order. The longer view is still bullish and there is no reason that support won't hold. The action on Wednesday looked like a shakeout of the weak hands.

HOGS - After breaking out to the upside Hogs have fallen on hard times and are now breaking down. Our algorithm is now short Hogs and they look like they can go lower especially looking at the backwardation. It looks like the breakout was based on more swine flu talk and once the news hit the street Hogs fell apart. Hogs look to be in trouble here and we are short

Go back to the The Ag Report.